Skip to content
How close are we to a cashless society? 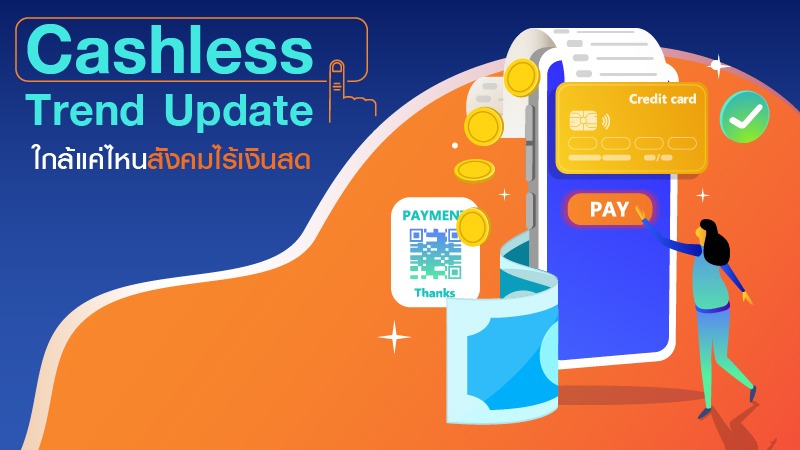 Cash is no longer king. The vision of a cashless society has emerged in recent years as alternative payment methods have become a part of everyday life around the world. As technologies such as PromptPay and digital wallets are making it more convenient to pay online, people are gradually spending less money in cash form. Payment for goods and services can be made easily using QR codes and mobile apps.

In Europe a cash-free future is on the horizon. More than 78% of European businesses accept cashless payments via cards or apps, while about 90% of businesses are already prepared for a cashless society, according to Norwegian payment platform Auka. In Northern Europe some shops no longer accept cash. Half of retailers in Sweden plan to stop accepting cash by 2025. Eastern European countries are not far behind either, with Romania, Bulgaria and Croatia quietly achieving innovations in digital payments.

How do we go cashless?

There are currently two main types of cashless spending.

The first covers credit and debit cards, which, although not a new technology, is constantly advancing in terms of system speed, stability and enhanced customer experience, both online and offline. Cards can also be integrated into other digital experiences such as e-wallets and public transportation payment. In the US, the home of VISA and Mastercard, more than 80% of in-store payments were made using credit and debit cards. In 2018, the Federal Reserve reported 41 billion card transactions with the combined payment value of more than $3.8 trillion.

The second type of cashless spending is using mobile payment applications. It’s impossible to discuss mobile payments without bringing up China, where the government has worked with the private sector to create a largely cashless society. According to Daxue Consulting, 92% of Chinese consumers in cities use WeChat Pay or Alipay as their main means of payment, while 47% of the rural population also use mobile payments regularly. People pay with their phones for everything via QR code technology: goods and services in shopping malls, taxis, buses, and even buying food from roadside vendors. In early 2019, WeChat Pay and Alipay both announced reaching over 1 billion active users each. Mobile payments have become an intensely contested space, with service providers ranging from commercial banks or large companies like PayPal, Apple Pay, Google Pay, Samsung Pay, to start-ups and fintechs offering digital wallets as part of other applications, such as ride-hailing applications LINE and Grab.

Digital currency, another form of cashless payment, has become a hot issue in recent years. Beyond the well-known Bitcoin and Ethereum are many other digital currencies that are emerging in the hope they can eventually be used to pay for goods and services like sovereign currencies. However, these cryptocurrencies remain controversial for a number of reasons including privacy, regulation and value consistency. Even with Libra, a project by Facebook, questions remain about safety and its possible use for illegal transactions, such as drugs trafficking and funding terrorism.

Despite its teething issues, digital currencies are still seen as a promising area with central banks in many countries starting to develop their own digital currencies and test the related technology operations and possible risks. These countries include China, Sweden, the Bahamas, Uruguay, India and Thailand. The Bank of Thailand is currently in Phase 3 of Project Inthanon, its central bank digital currency testing, the stage of connecting the currency to related systems to support international transactions. If successful, international transactions could become faster and more efficient.

Maybe not cashless but less cash?

While many countries try to transition toward being cashless societies, some argue there remains a need for cash, especially for elderly people and communities living in remote areas which may lack the required technology infrastructure for seamless cashless transactions. Furthermore, cashless systems present new problems: data privacy, risks of cyber threats, lagging regulatory and legal systems, and few policies to control working capital and digital currencies.

Similarly Thailand is seeing less cash being used. According to a survey by VISA in 2018, more than 68% of Thai consumers believe Thailand will transform into a cashless society within seven years, while more than 40% say they can go through a regular day without having to carry cash on hand. Thailand ranks top amongst the ASEAN region in embracing digital payments, though cash continues to be important for Thai way of life with shopping in mom and pop corner stores and using services from small providers.

For Thailand to fully enter the digital era, collaboration will be needed between the government, the private sector and consumers to leverage the latest technology and keep pace with the rest of the world.

Read More >> Biometric Payment: When you are the password