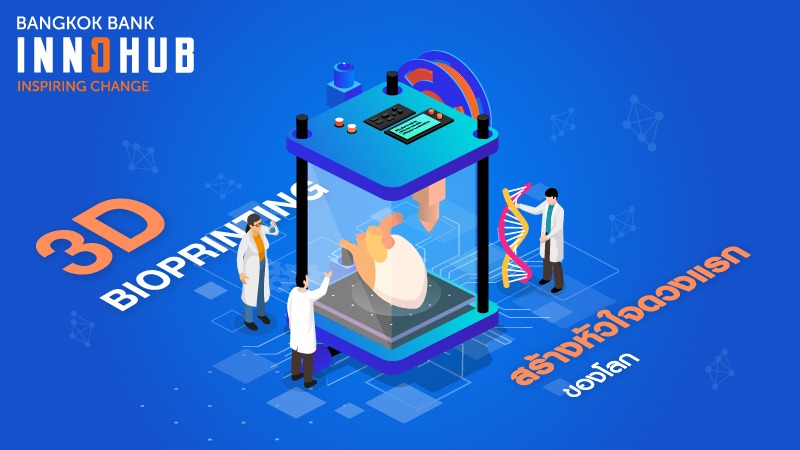 The shortage of organs for transplants is a major issue faced in the medical field around the world. In 2019 in the US alone, there are more than 100,000 patients on the waiting list for organ transplants. In Thailand, the Thai Red Cross revealed that there are currently 6,401 registered patients waiting to receive organ donations though only 585 have undergone a transplant each year.

According to research, 18 people die every day waiting for transplants. The severe urgency of the issue has pushed leading companies and scientists around the world to try to find possible solutions to this problem. For instance, in the US, a biotechnology startup called eGenesis has conducted transplantation experiments using genetically modified pig organs on monkeys to explore the possibility of transspecies transplantation for humans. In Thailand, some parties are pushing for a law of ‘opt-out’ organ donation, which means all citizens are automatically listed as an organ donor and will have to explicitly opt-out and withdraw their name from the list if they do not agree to be a donor.

But there is new hope in the medical community about up-and-coming technology that can help reduce the organ shortage — 3D printing.

3D printing technology has advanced far enough to make human organs — known as 3D bioprinting. This technology is regarded as one of the greatest revolutionary breakthroughs in the medical community as it can produce artificial organs for patients in need without having to wait for organ donations. It can also be used to make realistic organ models for educational purposes. Similarly to other 3D printers the width and length are printed first, then other details are printed in the cross-section using special ink material. In the 3D bioprinting process, the cross-sectional material comes from a patient’s tissue cells to prevent organ rejection from their own immune system.

The first prosthetic organ ever made with 3D bioprinting technology was a three-dimensional heart produced by Israeli scientists. The heart is about 2.5 centimetres long, the same size as a rabbit’s heart — about 4 times smaller than the human heart but with a similar structure. The scientists used parts of a patient’s fat tissue cells such as collagen to be used as biological ink in forming the heart and transformed cells into stem cells to develop them into new heart cells.

A team of US researchers from Rice University, Texas, used 3D bioprinting technology to produce a 3D lung smaller than a coin and surrounded by tiny blood vessels, which was used as a model to demonstrate functions of real human lungs. This will support efforts to develop artificial lungs or alveoli for patients with lung diseases.

Scientists at Tel Aviv University in Israel have predicted that within the next 10 years, large, modern hospitals around the world will have 3D printers on hand to print replacement organs for patients. With such a positive forecast, the issue of worldwide organ shortages might gradually decline and in the near future, we may see artificial organs manufactured in large numbers using bioprinting technology to support the needs of patients around the world.Read more >> Health Tech – when technology revolutionizes medicine