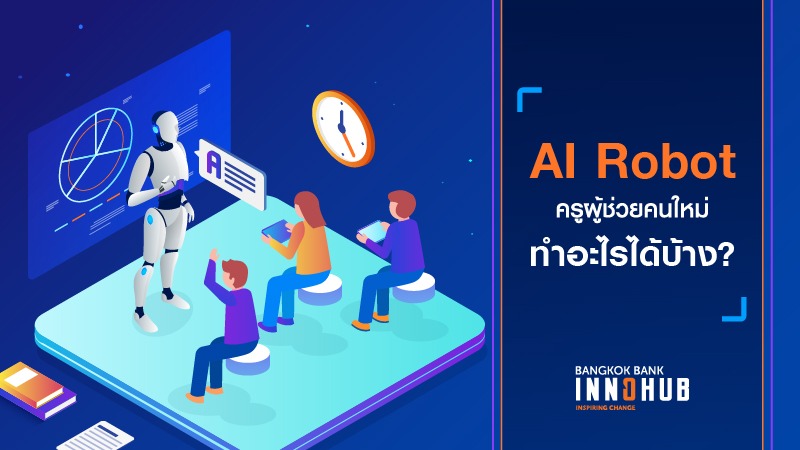 AI systems are now being developed so fast they might one day be able to replace humans at their jobs. However not much has changed in Thailand’s education system – for example, some Thai schools still use blackboards for teaching local students. So when will our education system adopt AI technology?

In several countries, AI technology is already playing a major role in supporting academic courses. For instance, a teacher may use AI for translation while using PowerPoint and this is useful for international classes attended by both foreign and local students. AI also helps to guide teachers if students have a poor performance as it can identify strengths and weaknesses and adjust the course accordingly. Furthermore, AI works well in self-directed learning.

China is one of the countries beginning to adopt AI technology in its schools. According to a recent report, approximately one-quarter of Chinese academic institutions have used AI to detect and correct grammatical errors in students’ written essays as well as logical fallacies. This AI function is similar to “e-rater”, an automatic system from the US, used by the Education Testing Service to check students’ essays by uploading files into a system which automatically detects grammatical and vocabulary errors. This is convenient for teachers and reduces the time required to check each written paper. Even though this is still at the testing stage researchers anticipate AI will soon become a game-changer that will boost education standards.

In the near future, AI could become a significant part of Thailand’s education system supporting many aspects of the academic world. However it needs to be monitored and controlled by responsible educators because AI algorithms rely on input from humans and if this is wrong, errors can be magnified. Moreover, AI can crunch data but it is unable to demonstrate morality and ethics. Hence, it is essential to have real-life-teachers to shape students’ minds so they can have a bright future. If Thailand were to adopt AI in its educational system, we would be able to see some innovative methods such as an exam-checking mechanisms that can calculate results right after a student’s submission and so on.