Is the Tech Sector Sexist?

Is the Tech Sector Sexist?

A famous story from the novelist David Foster Wallace describes two young fish, swimming in the sea. They are approached by an older fish swimming in the other direction, who says: “Good morning, boys – how’s the water?” They smile politely and keep going, then later one of the younger fish turns to the other and says: “What’s water?”

The view from inside

Just like the fish in our example, when we’ve only experienced one environment, its features begin to feel natural, normal, and inevitable, as though there is no other way to live. Sometimes this phenomenon limits our collective imaginations, preventing people from recognizing the opportunity for (or even the necessity of) change.

Thus we see Silicon Valley products designed mostly by men – more on that later – which often ignore the specific needs and preferences of female consumers. Several of these are highlighted in an article in The Economist, which reminds us that smartphones tend to be designed for men’s larger hands, that early versions of Apple’s smartwatch and Health app had no feature to help women track their menstrual cycles, and so on.

These kinds of oversights are often the result of product developers whose imaginations may have been limited by their own experience or a narrow world-view. Without a certain level of diversity in the workplace, it becomes difficult to ‘step out of your own skin’ and appreciate that other people may have other needs. The homogeneous work environment starts to feel natural, and its biases become harder and harder to see.

It certainly doesn’t help that the ‘ladies’ version of various consumer goods is frequently the exact same thing as the standard version, but more expensive and sold in pink color. Women could be forgiven for noticing this pattern, and thinking they have been treated unfairly by manufacturers in the tech industry and beyond.

But the free market is designed to correct for these kinds of gaps. If one company ignores the needs of female consumers, it is ignoring a competitive advantage that a rival company can then take for itself. No company in a crowded industry wants to give up its share of the market, especially if losing its female customers means missing out on half of its revenue.

Perhaps there is more going on here than simple discrimination. Perhaps the fish in our story need to make one more discovery before they’re able to see the bigger picture.

Water may be invisible for our fish, but so is the current that pushes the water in a given direction. Here on land, we talk about how important it is to know which way the wind is blowing to understand our social environment. That, environment  is inspired by the opinions that the people around us have on the major issues of the day.

A major contemporary social trend involves seeing group differences as proof of discrimination. This idea is based on a certain logic which is compelling for many people: We are all born with the same potential, so any group differences in outcome must be the result of unfair environmental conditions.

Sometimes this logic leads to an accurate understanding of an issue, but sometimes it doesn’t. In the case of the tech industry, it is true that men make up the clear majority of workers. This disparity, as seen in the image below, means that new products in this sector are primarily designed, engineered, and marketed by men. 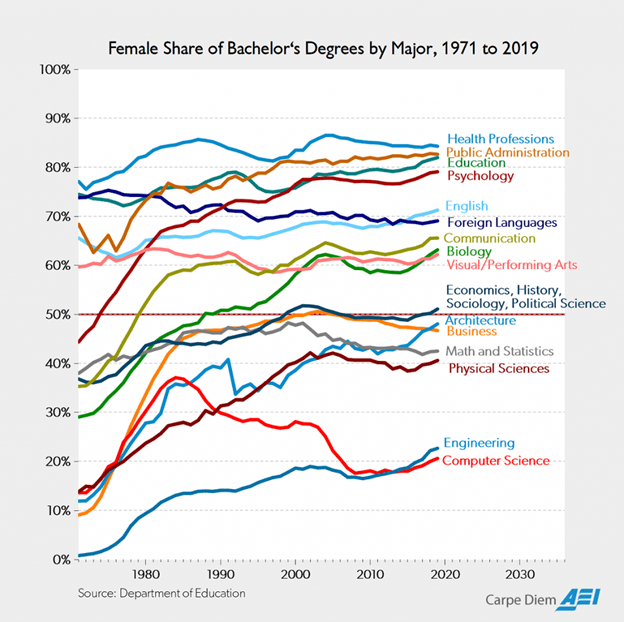 Yet this data, which comes from the United States, is replicated in every country where both women and men are able to freely choose their professions. China, for example, has little in common culturally with the US – but the similarities in outcome are unmistakable: 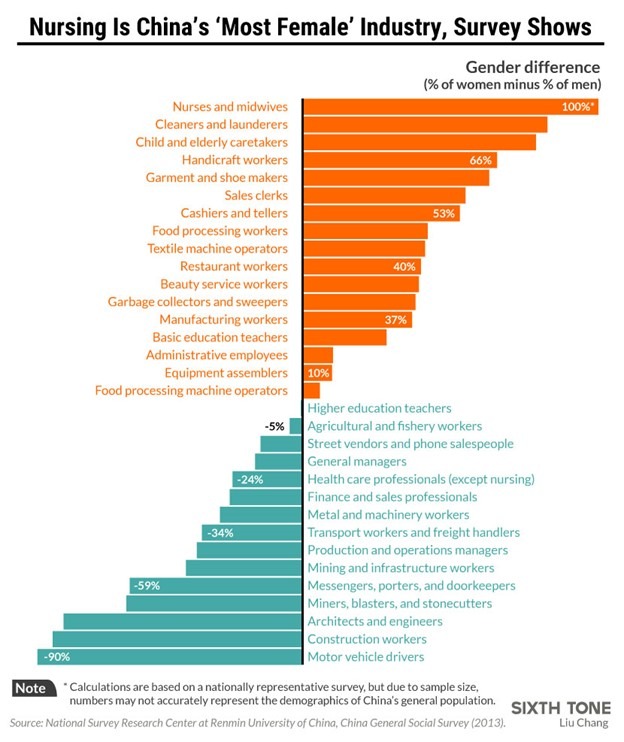 Everywhere we look, men on average gravitate more toward jobs based on systems, while women on average gravitate more towards jobs based on people and relationships. Of course, any single person will have their own personal interests, which could be anywhere on a very wide spectrum. But at the level of entire populations, the data is remarkably consistent. Here’s Australia: 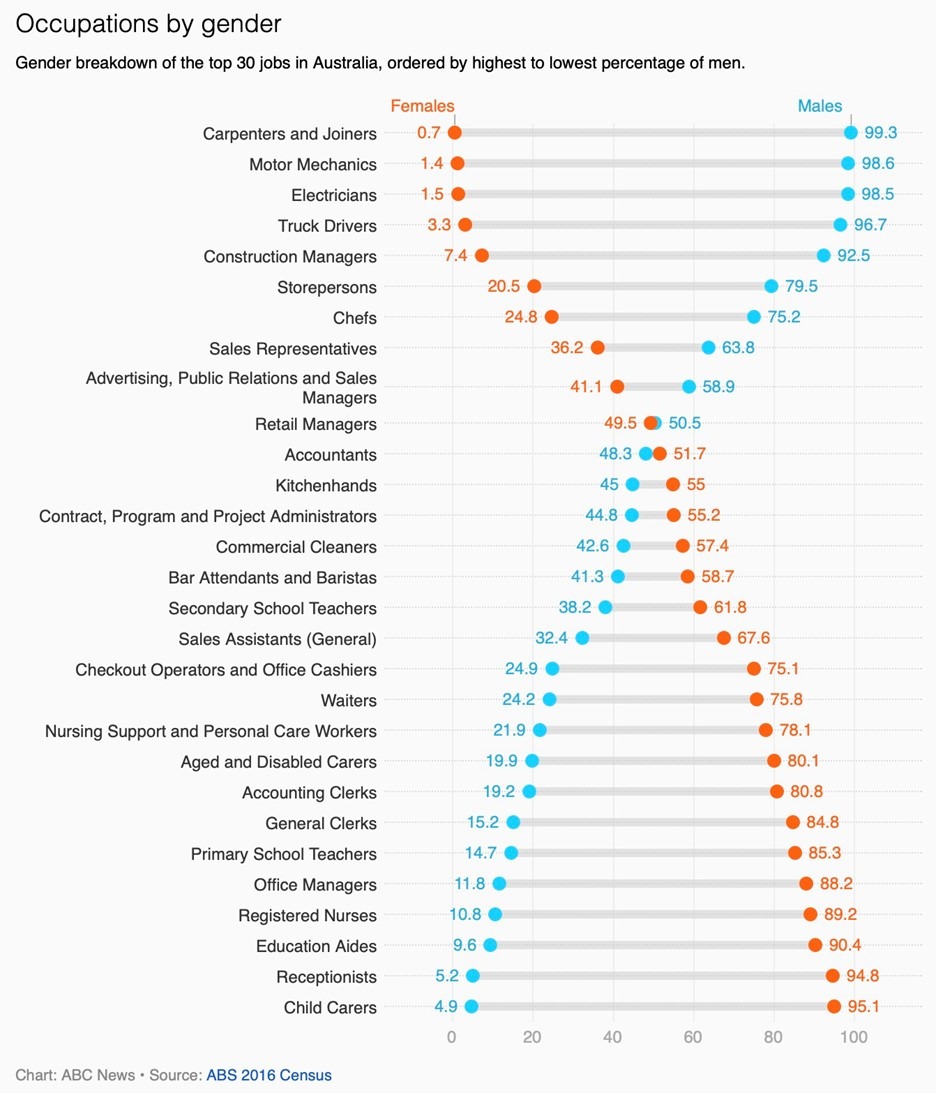 The issue is nuanced and complicated, and impossible to easily define, but questioning the demographics of large industries, the consequences this has, and if there is any way to make them more equitable is a noble pursuit.

Though common, these occupational disparities do lead to regrettable blind spots. Products made by men are more likely to be made for men, even in cases where such a narrow focus is entirely accidental.

Moreover, industry analysts have shown that companies with a more equitable gender balance are able to achieve higher levels of growth and stability. An article in the Human Resources organization SHRM includes this important summary of the available data:

When women develop products and lead their companies, those organizations not only hire more women and increase diversity but also perform three times better than those with male CEOs, according to Quantopian, an investment platform. More-diverse companies also have 22 percent lower turnover.

Therefore, there really are opportunities for companies to carve out a successful market niche by hiring more female employees, and tailoring their products to the needs and preferences of female customers. We enthusiastically support this kind of initiative, and see it as a model example of the overlap between good business and much-needed social progress.

At the same time, it is worth keeping in mind that balance and objectivity are virtues. To label a single person as sexist is a strong accusation indeed, and likely to provoke an emotional response. To label an entire industry as sexist, without strong evidence, is a strategy that seems guaranteed to generate more heat than light.

The tech sector should make a far greater effort to create an atmosphere where women feel welcome and encouraged to have their say. Diversity brings more perspectives, new ideas, and better overall outcomes at every level of business. This simple truth directly addresses the core issues, avoids unnecessary blame, and can lead to a better environment for us all.